Central Bank Digital Currencies are new forms of online money. They were inspired by cryptocurrencies. They claim to be easy to hold and cheap for cross-border transactions. But commercial banks are afraid that Central Bank Digital Currencies will not favour them. Read this post to get familiar with the issues surrounding these new forms of digital currency.

What are Central Bank Digital Currencies?

A Central Bank Digital Currency (CBDC) is a form of electronic money issued by the Central Bank of a country. A CBDC, like fiat currencies, can be used to make payments and transfers. It allows direct person-to-person and vendor-to-customer cashless transactions. While a few countries have already begun to use CBDCs, others are testing them in pilot stages, and still, others are developing theirs.

Countries that have launched their CBDCs

Some countries were fast in the creation of their Central Bank Digital Currencies. Hence, these are the countries where digital currencies are  already in use:

The Central Bank of the Bahamas issued the Sand Dollar as its CBDC in October 2020. It was the world’s first nationwide CBDC. The government of this island country is using its Sand Dollar to strengthen its efforts toward preventing money laundering. It is also using it to increase public access to financial services.

The Eastern Caribbean Currency Union (ECCU) is a group of eight island countries. To serve people who do not have bank accounts as well as increase the speed of financial transactions in the ECCU, seven of its members, excluding Anguilla, agreed to the creation of a digital version of the Eastern Caribbean dollar. It is named DCash and was released by the Eastern Caribbean Central Bank (ECCB) in March 2021. It was known as the first blockchain-based digital currency by a currency union in the world. DCash can be accessed through its wallet, which can be downloaded online.

Note: The members of the ECCU are Anguilla, Antigua and Barbuda, Commonwealth of Dominica, Grenada, Montserrat, St. Kitts and Nevis, Saint Lucia, and St. Vincent and the Grenadines.

In October 2021, Nigeria launched its eNaira. Thus, it became the first African country to issue a CBDC. The eNaira was designed to be stored in two digital wallets or apps: one for individuals and the other for merchants. They can be downloaded from the Play Store and the App Store.

Countries that are testing their CBDCs

Some countries have ongoing pilot projects which they are using to test their CBDCs. Here is the list of them:

China is the first country in the world to start a pilot project focused on testing its CBDC. It started testing its digital yuan, e-CNY, in April 2020, through its central bank, that is, the People’s Bank of China. The digital yuan wallet can be downloaded online. The country is attempting to make e-CNY widely used in households by the end of 2022.

Sweden is testing its own CBDC called the e-krona. This project is headed by the Riksbank, which is the central bank of Sweden. The government wants to use e-krona to protect the elderly and disabled people in a cashless society by creating broad access to it.

The Russian government is testing its digital ruble through its Central Bank. The series of tests, which started in December 2021, is currently being done with some commercial banks. The target is to start real-world use of digital rubles in transactions in 2023.

Following a successful pilot test in 2021, the Bank of Jamaica said that it will launch its digital Jamaican dollar before the end of 2022. In this way, the government is trying to include more people in the financial system by giving them access to its CBDC. It is hoped that the digital Jamaican dollar will reduce the cost of banking in the country. The government also intends to use it to increase the speed of transactions.

Since 2016, Ukraine has been developing its digital currency on the Stellar blockchain network. In August 2021, the government of Ukraine announced its plans to start testing its digital version of the Ukrainian hryvnia soon. However, there have been delays in the testing stage.

Countries where CBDCs are in development

Here is the list of notablecountries and the regions where the idea of using a CBDC is being developed for testing:

India is developing its digital rupee through the Reserve Bank of India. It is to be based on blockchain technology. The digital rupee is expected to make domestic and cross-border payments faster. The goal is to get it ready for use by March 2023.

The central bank of the Eurozone is the European Central Bank (ECB). In July 2021, the ECB told the public that it is considering the idea of developing a digital euro for the 19 European Union countries that use this fiat currency. It was inspired by cryptocurrencies and the shift away from cash to digital currencies since the COVID-19 pandemic. The plan of the ECB is to use the digital euro to allow continuous access to central bank money.

In March 2022, President Joe Biden of the United States of America issued an order to the US Treasury Department and other major agencies to write a report on how Americans who lack access to bank accounts can be included in the financial system. He also asked them to look into the creation of a digital US dollar.

Banks are afraid of CBDCs because transactions made with this kind of digital currency are directly managed by central banks. They also do not require the use of cash, which commercial banks often keep for their customers. Even though commercial banks deal with electronic money, which is what you have in your bank account, they can still convert it into cash (paper money). But CBDCs can not be converted to cash. Therefore, banks are afraid that CBDCs might reduce their function and importance in society.

How can CBDC affect the crypto market?

It is too early to say exactly how these two forms of digital currency will affect each other on the market. This is because there are still many questions that have not been answered in connection with the design and operation of CBDCs. There is no single model for every country to follow. Each country creates its own design for the use of its CBDC. So, the questions that need to be answered include these:

Furthermore, ordinarily, CBDCs should not threaten or negatively affect the existence of cryptocurrencies on the market. Why? CBDCs are centralised digital money, while cryptocurrencies are decentralised digital currencies. This means that central banks can control CBDCs and leave citizens with the only option of trusting their governments to make the right decisions about their access to CBDCs. But crypto cannot be manipulated by a single organisation or a particular region. Anyone with access to the internet can use cryptocurrencies. One way to use the two at the same time is to allow cryptocurrencies to be used as assets for investment, while CBDCs can be used as online money for daily transactions.

Crypto tools to use before CBDC comes along

While waiting for the central bank of your country to develop or launch its CBDC, you can use cryptocurrencies. Popular cryptocurrencies include Bitcoin (BTC), Ethereum (ETH), Ripple (XRP), Tether (USDT), Binance Coin (BNB), and Cardano (ADA).

The best digital tools, apps, and payment systems for buying, selling, storing, and exchanging cryptocurrencies are:

Advantages and disadvantages of cryptocurrency 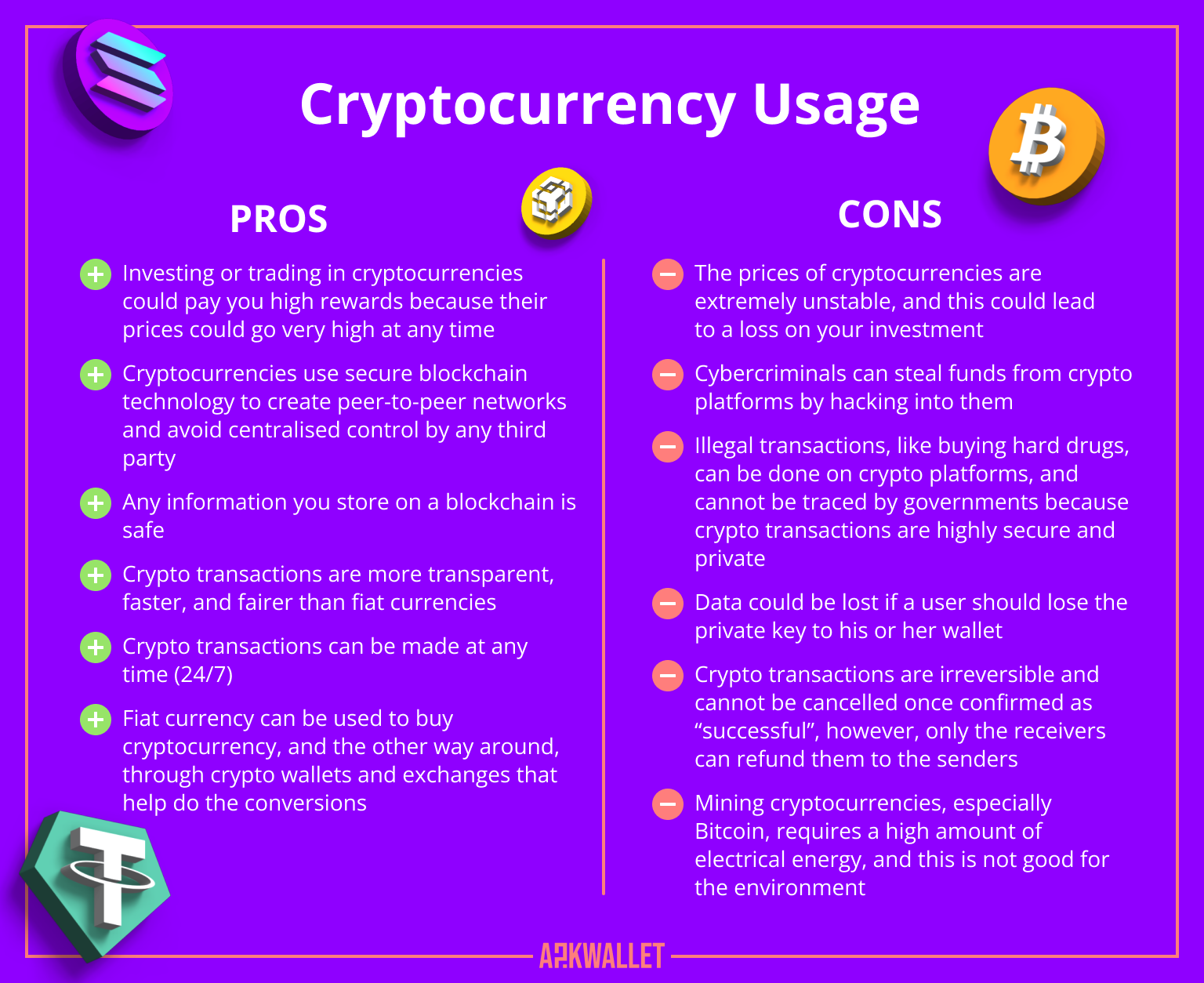 Due to a better understanding of how crypto works, there are now many crypto-friendly banks in the UK and some other parts of the world. Similarly, banks need to understand CBDCs so that they can embrace them in innovative ways instead of being afraid that they might render them needless. Besides, the use of cash is still important to society for many kinds of retail and wholesale payments. Therefore, in the meantime, people need to use fiat money and digital currencies as they wish. You can use your country’s CBDC, if available, or use any of the crypto tools we have listed in this article for a more convenient payment experience.

Crypto-Friendly Banks in the UK

How to convert crypto to cash?